If you're new here, you may want to subscribe to my RSS feed. Thanks for visiting!

It is about time we talk about version 10 of PHPRunner, ASPRunner.NET and ASPRunnerPro. We expect beta version to be available in November and stable version will be released before the end of the year.

Make sure that your software maintenance is current. Otherwise you will have to purchase version 10 at the full price.

The most interesting new feature in this update is Page Designer which will complement and eventually will replace the Visual Editor. This is quite a big change and before we talk about new functionality I need to explain why this change was required. 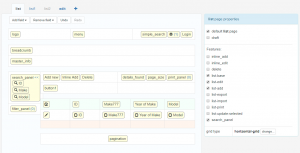 Visual Editor for many years was used by the top digital agenices in Australia as a primary way to customize the appearance of pages but we were hitting its limitations more and more often lately. We tried to introduce workarounds like Layout Editor and Free-Form mode but those were half measures.

Page Designer is a grid-based design tool that is supposed to take care of above issues plus adds more functionality.